In a major new initiative funded by the California Conservation Genomics Project, the Shaffer Lab is collaborating with Ian Wang’s group at UC Berkeley and multiple state and federal agency scientists to produce landscape genomic data and analyses for 34 species of reptiles and amphibians covering the breadth of California. Our goal is to produce a comprehensive analysis of the geography of genetic variation to guide management and habitat protection now and in the face of climate change. 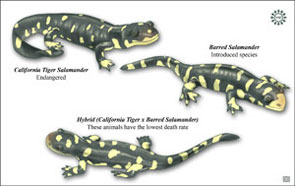 The primary project focuses on the federally and state listed California tiger salamander, Ambystoma californiense. The species has declined across its limited range in central California, and our work has provided the scientific backing both for listing the species, and for delimiting species boundaries, understanding patterns of gene flow, and quantifying the ways that salamanders live in the harsh ecological landscape of the Great Central Valley. Much of our recent work has focused on an amazing case of hybridization between non-native, introduced Barred tiger salamanders and native California tiger salamanders. It’s a story that has as much to say about mechanisms of speciation as it does about conservation biology, and we continue to explore the system from a variety of genetic, genomic, and ecological perspectives.

Turtles of the World

Turtles are an amazing group- distinctive, easy to wrap your head around, admired and 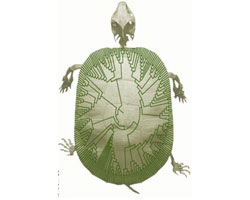 loved by many people, and arguably the most endangered major clade of vertebrates on earth. A central project in the lab is to acquire 2-3 tissue samples of every species of turtle on earth, sequence them for ~20 independent genes, and build a phylogeny for all 320 or so species of turtles and tortoises that are living today. We have acquired the tissues, and done the sequencing and phylogenetics, for roughly 2/3 of the world’s turtle fauna, and hope to complete the project in the next year or so. We’ll use the resulting tree for projects ranging from phylogenetic prioritization for conservation biology, to studying species limits in problematic groups like US map turtles and Australian chelids, to examining the evolution of shell and skull morphology during phylogenesis. 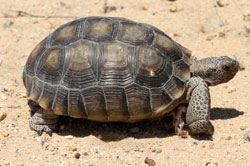 With funding from the state of California and the US Fish and Wildlife Service, we are developing a radical new genomic toolkit to learn more about how desert tortoises use their habitat and how to avoid conflicts with green energy projects in the Mojave Desert. We will learn more about where they go, how they traverse the complex soils, vegetation types and topography of the desert, and how tortoises and their genes flow across the desert. By using a genomic approach, we can study literally thousands of genes scattered across the tortoise’s genome to learn, in great detail, how they move and what corridors they prefer in key areas of the desert. Our goal is then to predict, using landscape genetic models, the impact of alternative placements of solar installations on habitat connectivity from a tortoise perspective. Some placements may isolate and fragment the habitat much more than others, and our landscape genomic work should provide quantitative estimates of those effects, projected forward over the next 50 years or more.