Marmots emerge through the snow in April and early May, during which time there may be nothing to eat, and when they are especially vulnerable to predators. We’ve seen foxes and coyotes wait outside snow tunnels from their hibernacula waiting to eat them. However, this is mating season and males may move from hibernacula to hibernacula visiting females in their harem. We’ve even seen some males bring dried flowers to their potential mates! 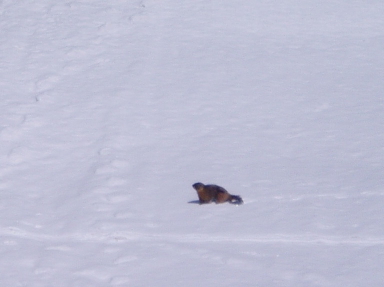 Once the snow melts marmots eat. And eat. And eat. They are herbivores and eat a variety of grasses and forbes. Eating is important because they must double their mass during the year to ensure survival through the next winter. Gestation is about 32 days and mothers nurse their young in their natal burrows for about another month before the pups emerge above ground. 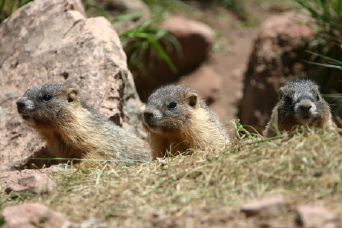 Pups, which emerge in late June through late-July must more than double their emergence mass to have a good chance of survival. The average litter is about 3-4 pups, but we’ve had emerged litters as small as 1 and as big as 9. Such variation makes this population a great system to try to understand the reproductive and fitness consequences of litter size variation. 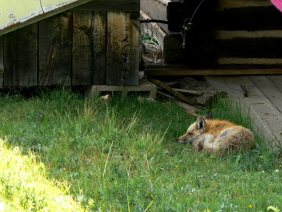 After emergence, pups are especially vulnerable to predators. We’ve had resident red foxes kill all the pups in town and most of the pups in the adjacent 2 km! To deal with their predators (which also include coyotes, raptors, and bears), marmots have a sophisticated set of antipredator behaviors. They allocate time to anti-predator vigilance and modify their vigilance according to the riskiness of a location. They can identify predators using their ears, eyes, and noses. There has been selection for them to run fast to flee predators (they run about 3m/s). When they detect predators, marmots are able to communicate the degree of risk to other marmots with their alarm calls. And, they are selective about where they forage. 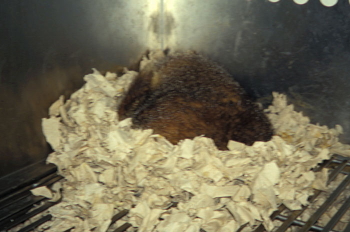 If marmots survive the summer, they hibenate starting in late September. During this hibernation period they survive entirely on their stored fat. We’ve studied hibernation in captivity and know something about its metabolic cost. Hibernation involves bouts of deep torpor (where marmots maintain a body temperature a few degrees of the ambient temperature in their burrow) and periodic arousal (where they arise and pee before going back into a deep torpor bout). During the depths of the winter, deep torpor bouts can be up to about 2 weeks long, while in Spring, bouts are shorter and their body temperature is warmer. Hibernation is remarkably efficient during the winter; marmots burn almost nothing. Spring is much more costly and emerging earlier to find no food causes marmots to lose a lot of mass.