Domestic dog olfaction and morphological diversity within the skull

Within the mammalian nose is the cribriform plate, through which all olfactory nerves pass through to get from the nasal passage to the olfactory bulb within the brain. Recent research in our lab has found a relationship between the surface area of the cribriform plate and the number of active olfactory receptor genes within the genome of that species. We are continuing to study this relationship in the unique case of the domestic dog, which has undergone rapid morphological change in a relatively short span of time due to artificial selection.

Function and evolution of mammalian turbinates 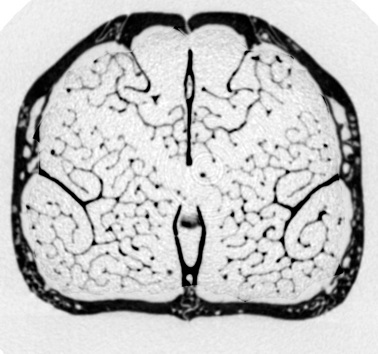 A major area of my current research involves the study of turbinate (both respiratory and olfactory) structure across the entire order Carnivora.  Nearly all mammals possess complex bony scrolls within the nasal chamber, the maxilloturbinates, which function to conserve water and warm inspired air during ventilation. Olfactory turbinates are adjacent to respiratory turbinates but are covered in sensory epithelium. Despite the fact that olfactory and respiratory turbinates make up as much as a third of a mammalian skull, variations in their structure are poorly understood, largely because the fine-scale and internal location of turbinates make them difficult to visualize.  Funded by NSF, we are using enhanced computer visualization of high-resolution CT scans to quantify turbinate surface area and other parameters in 30+ species across the order Carnivora (click here for a list of scanned species: CT scanned carnivora.pdf). Working with Dr. S. Soatto and his graduate students in the Computer Science Department at UCLA, we developed new software to resolve these complex structures and virtually extract them in three dimensions from the skull such that aspects of their anatomy can be readily quantified.  In collaboration with engineers at Penn State, we are using computational fluid dynamics to quantify airflow in the nasal cavity.  Ultimately, insights from this work will be transferable to fossil mammals, assisting us in reconstructing the evolutionary history of two fundamental features of mammalian evolution: olfaction and respiration.

Parallels between past and present predator guilds 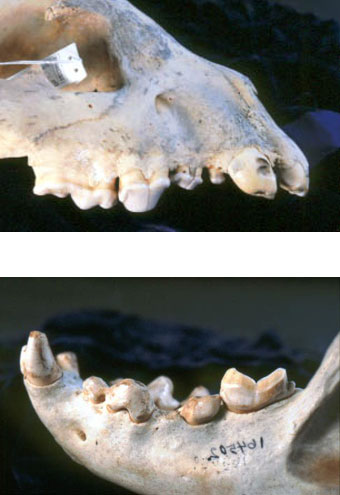 Using tooth wear as a window into past community dynamics is a novel approach to the fossil record that I pioneered.  I first explored the implications of unusually heavy tooth wear in Pleistocene carnivores in a 1993 Science paper on Rancho La Brea carnivores. More recently I compared dental fracture frequencies between several Pleistocene predator populations (Alaska, California, Texas, Mexico, Venezuela) and those of 35 species of extant carnivores, ranging from skunks to lions.  The mean frequency of tooth fracture in all the Pleistocene species was four times that of modern species, and the trend was even apparent when comparing Pleistocene and living populations of the same species such as coyotes and wolves. This suggests that selection pressures on large carnivore in the pre-human dominated world may have been just as severe, although different in kind from what they experience at present and historically, and should alter our view of how pristine mammal communities functioned.

Seeking yet another novel approach to interpreting the lives of extinct species, I turned to predator playback experiments in Africa used to census lion and hyenas. In these experiments, the sounds of dying wildebeest are used to attract carnivores and the individuals are counted.  I was struck by the similarity between the playbacks and the situation at Rancho La Brea in which numerous carnivores were lured to their death by a dying herbivore in the tar seeps.  In the African experiments, large and small social species (lions, hyenas, jackals) actively moved towards the playbacks while large and small solitary species rarely did so.  This suggested a strong advantage for sociality (safety in numbers) when approaching a carcass, given the potential danger for battle with similarly motivated individuals.  Working with C. Carbone and others, we showed that the parallels between La Brea and Africa were remarkable, assuming that the sabertooth cat (Smilodon) was social. Instead of hyenas, lions, and jackals, it was dire wolves, Smilodon, and coyotes.  It is very difficult to infer social behavior in extinct species, and our paper provides the strongest inferential evidence for sociality in a sabertooth cat thus far.